Report from the IEC meeting in San Luis Obispo

“Where is that???” is the most common response when I’ve told anyone that I’ll be attending the IEC working group meetings in San Luis Obispo. Well, it’s a nice little town in California about half way between San Francisco and Los Angeles. The town has a population of about 40,000. 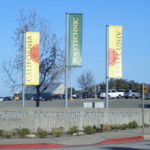 It also seems like there’s another 40,000 people at CalPoly, or to give it it’s full title “California Polytechnic State University”.

One of those people at CalPoly is Dennis Derickson the editor of the well known book on “Fiber Optic Test and Measurement”.

CalPoly is also where Jack Dupre, the Secretary of SC86C, did his studies many years ago,

and so an invitation was arranged for CalPoly to host the IEC SC86C Working Group meetings in the run up to OFC held in the Los Angeles Convention Centre this year (more on that in my next blog). The emblem of CalPoly is the Mustang, & they get everywhere…

But anyway, on with the business…

In SC86C Working Group 1 (fibre optic systems) we discussed comments on the next edition of 61280-4-2, the standard for testing insertion loss and optical return loss of singlemode fibre optic cabling. I am the project leader for this document. It contains some important new recommendations including the requirement for launch and tail leads when OTDR testing (learn all about it on the CFCE course!). We also discussed PMD measurements on installed cabling; I’m also the project leader for this.
Other interesting items on the agenda included fibre optic sensors and new methods of assessing the signal quality of complex modulation formats such as DP-QPSK using the Error Vector Magnitude (you can learn about this on the CONE course).

Working Group 3 deals with optical amplifiers and there were significant discussions on reliability standards, as well as a joint discussion with WG4 (Active Devices) on Semiconductor Optical Amplifers. In WG4 a new standard for 1310nm VCSELS was proposed and it seems that the long running “wiggle” issue is reaching a conclusion.

Also, of course, we did manage to find time for a beer or two. See photo of Andrzej in a characteristic pose at www.centralcoastbrewing.com – well worth a visit if you’re in the area!
Share

Welcome to my blog!
I’m generally pretty well known for having an opinion on all things to do with fibre optics, optical networking, training and standards.
I’ve been involved with fibre optics for more than 30 years and I'm passionate about promoting, and contributing to, professionalism in our industry.

This website uses cookies to improve your experience while you navigate through the website. Out of these, the cookies that are categorized as necessary are stored on your browser as they are essential for the working of basic functionalities of the website. We also use third-party cookies that help us analyze and understand how you use this website. These cookies will be stored in your browser only with your consent. You also have the option to opt-out of these cookies. But opting out of some of these cookies may affect your browsing experience.
Necessary Always Enabled
Necessary cookies are absolutely essential for the website to function properly. These cookies ensure basic functionalities and security features of the website, anonymously.
Functional
Functional cookies help to perform certain functionalities like sharing the content of the website on social media platforms, collect feedbacks, and other third-party features.
Performance
Performance cookies are used to understand and analyze the key performance indexes of the website which helps in delivering a better user experience for the visitors.
Analytics
Analytical cookies are used to understand how visitors interact with the website. These cookies help provide information on metrics the number of visitors, bounce rate, traffic source, etc.
Learning management
On the course resources area of our site learning management cookies are used to manage your progress in the course and to make elements such as the review questions work correctly.
SAVE & ACCEPT
Powered by